The Indianapolis Airport Authority (IAA) is continuously focused on long-term stability and sustainability. We are innovating and preparing for today, tomorrow and the future.

The IAA is committed to environmental sustainability. Our goal is to minimize the impact of our operations on the environment by exploring continuous improvements and opportunities for innovation. We strive to act as responsible stewards of the environment at all times.

In 2017, Indianapolis International Airport (IND) successfully received the Level 2 Reduction of the Airport Carbon Accreditation (ACA) Program. This level of accreditation is given to airports that have provided evidence of effective carbon management procedures and show that reduction targets have been achieved.

In 2019, IND received Level 3 Optimization of the Airport Carbon Accreditation (ACA) Program as well as Level 1 ACA certification for each Reliever Airport, making IND the largest accredited airport system in North America. Efforts to attain Level 3+ accreditation has prompted IND to become a partner in the Good Traveler Program. This initiative provides travelers a simple way to offset emissions resulting from their flight.

IAA commits to positive carbon reductions year after year to meet our long-term goal to be Net Zero by 2050.

Through VALE (Voluntary Airport Low Emissions) grants, we have reduced air carrier pollution at the cargo apron by replacing diesel power units and lights with electric units and lights. Resulting in reducing our NOx (nitrogen oxides) emissions by 25.87 tons–the equivalent of removing 282 automobiles from the road! We’ve reduced air carrier pollution at the terminal by utilizing:

This results in lower fuel consumption while loading passengers and baggage.

IND is home to the largest solar farm on any airport property in the world! 183 acres on IND airport property currently house 87,478 solar panels, enough energy to power 3,675 average American homes per year. The IND solar farm is a win-win for the community. It provides renewable energy to the electric grid and lowers emissions, improving our community’s air quality. It also lowers IND’s operating costs.

The Indianapolis International Airport (IND) was recognized for using airport land to help build a sustainable community. The IND Solar Farm received a 2015 Indianapolis Sustainability Award from the City of Indianapolis and Mayor Greg Ballard. IND has the largest solar farm of any airport in the world and generates enough electricity to power 3,200 average homes.

Learn more about this recognition.

In partnership with the White Lick Beekeepers Association, the IND Community Bee Apiary is housed on 4.7 acres of otherwise unused airport land. The apiary helps to preserve Indiana’s honeybee population and serves as a training site for future beekeepers. The site also serves an educational role for visitors from groups such as 4-H, and has been the focus of projects with local universities. This novel use of land is providing a bridge to the community that is supportive and engaging.

In 2017, the IND Community Bee Apiary was the recipient of the Airports Council International Environmental Achievement Awards in the award category of Outreach, Education and Community Involvement. 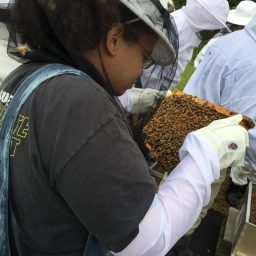 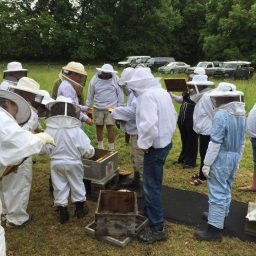 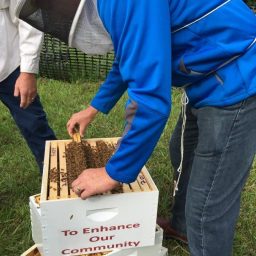 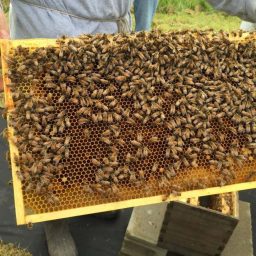 IND is now home to the largest airport electric bus fleet in the United States! By the end of 2019, the fleet will consist of 9 electric shuttle buses, made possible by IND receiving $18 million in a Zero Emission Vehicle (ZEV) grant. These shuttle buses will reduce IND's carbon footprint by 15 million pounds and will save an estimated $2 million in operating and maintenance costs. With a 6 hour full charge and 120 miles per charge, the electric fleet will replace 66,000 gallons of diesel fuel a year. The electric shuttle bus fleet will benefit local communities and passengers by decreasing emissions and improving the air quality.

The IAA strives to make a positive impact on our neighboring environment.

The IAA created and manages conservation land to preserve and protect the endangered Indiana bat and wetland habitats. The land provides an educational facility for the study of Indiana’s endangered animal and plant species.

The IAA partnered with Hendricks County Parks & Recreation to create a 210-acre natural park. This community gem attracts over 100,000 visitors each year.

For complaints about noise, please contact the noise complaint hotline at 317.487.5000.

The Indianapolis Airport Authority's 2013 noise exposure map update and report was accepted by the FAA on April 3, 2014. A summary of the report is also available.

IAA's noise mitigation program has dramatically reduced noise, stabilizing neighborhoods and property values while creating community goodwill. It is recognized by the Federal Aviation Administration (FAA) as a model for other airports to follow.

Launched in 1987, the noise mitigation program includes an update initiative every five years. Previous noise exposure studies and maps are reviewed, with particular emphasis on air traffic and operational projections. Update studies were conducted in 1992, 1997, 2003, 2008, and 2013.

The analysis process of all relevant material gathered during the update process resulted in the production of an updated map of the airport's noise contours as forecast through 2018. This material was also used to analyze the effectiveness of the airport's existing noise compatibility plan.

Ranked second in the nation at a commercial airport, this initiative has significantly reduced ground noise due to maintenance operations.

The IAA is committed to minimizing or diverting materials from Local Land Services and improving the environment. IND’s terminal recycling program is robust, with a short-term goal of recycling over 20% of the 2,300 tons of waste material collected at the terminal each year.

By utilizing a single-stream recycling system, where glass, plastic, metal, paper and cardboard are collected together rather than separately, the airport increases efficiency and boosts participation by terminal customers.

Recycling is so important to IND, we even recycled our old terminal! When the terminal was demolished:

The IAA is committed to managing its operations to reduce emissions and improve air quality. We continue to grow IND’s fleet of electric and hybrid vehicles and electric shuttle buses. We also provide our travelers with on-site Compressed Natural Gas (CNG) vehicle fueling stations and electric car chargers in the parking garage.

Through a Zero Emissions Airport Vehicle (ZEV) grant, IND purchased six electric shuttle buses and charging stations to establish the largest airport electric shuttle-bus fleet in the United States. When complete, this project will contribute to improve air quality and reduce the use of conventional fuels.